Two Decisions That Changed My Life

We can’t always control what happens in our lives, but we can control the decisions we make despite our circumstances. You never know how a decision in a critical moment in time can completely alter the course of your future.  A few years ago, I was struggling financially and dealing with the aftermath of a broken relationship. But little did I know, a few key decisions would make all the difference towards setting me on the path I am today.

Cutting up and paying off that credit card was the first step of my journey towards financial freedom.

I’ll never forget the day I decided to cut up my CIBC credit card. I had a rare quiet afternoon where I could catch up on all the paperwork I’d accumulated over a week of seeing patients. As I worked, I was listening to a Christian podcast challenging me to ask myself, “who do you trust, God, or money?”.

I immediately felt convicted when it came to my finances. I realized that over the last year, I’d relied so heavily on my credit card to pick up the slack of my overspending and poor money management, that I’d come to trust it to “save me” in times when money was tight. It wasn’t like I was overspending on luxuries, but one plane ticket, followed by a series of smaller purchases had added up to a rather large credit card balance.

Motivated by this newfound conviction, coupled with the sheer frustration of having to pay a credit card bill every month, I grabbed the scissors from the drawer, pulled my credit card out of my wallet, and went at it.

Two months later, on January 18, 2014, I was completely debt-free, and have remained so ever since.

Learning the real meaning of love

It was the Summer of 2014. Will and I had only recently started speaking again after being broken up for nearly a year. What began as a few, awkward conversations, eventually led to hanging out every now and then, and eventually deeper, more meaningful moments of connection. But, regardless of the little progress we were making, I still felt really insecure about the future of our relationship.

We had plans for dinner one Friday night. Finally, a real date! I came home from work, immediately started getting ready, and then, I waited. I could feel the surge of anger rise with every passing hour. I was so frustrated! After nearly a year of silence, followed by months of back and forth and confusion, I was determined that this would be the last night he’d hurt me. I was done fighting for this relationship.

After hours of waiting, I changed my clothes, took off my makeup, and had packed my bags to head to my Mom’s for the weekend. But, as I did so, something inside me urged me remain gracious, loving and understanding, despite the fact that I was feeling the complete opposite way inside.

Will got to my place by 9pm, just in time to apologize profusely for getting held up at work, and walk me to the train station. It took every ounce of strength I had not to blow up at him that night and completely throw in the towel in the fight for our relationship. But, I calmly forgave him, and said goodbye.

It was that night, as he watched me get onto the train, that Will made the decision to marry me. He proposed 6 months later.

Life will never be perfect, but there’s always something that you can do, decisions you can make, that will make things better, regardless of how terrible the circumstance. But, you have to make a difficult, maybe even radical choice. I didn’t know it then, but the decisions I made in 2014 made the biggest, most positive impact on my life today, and I’m so grateful I had the courage to make them. 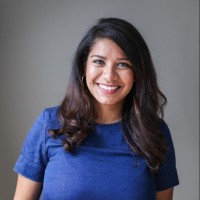 How to Slay your Student Debt Years Ahead of Schedule
April 26, 2018

3 Books that Actually Helped me Prepare for Marriage
March 12, 2018